In mid-April, Virginia’s Tidewater Community College announced it would lay off 27 people in the wake of a steep drop in student enrollment. Earlier this spring, Brookdale Community College, a New Jersey institution, sent out an email asking employees to take a voluntary reduced work week or unpaid leave to help the school get through a difficult financial situation. 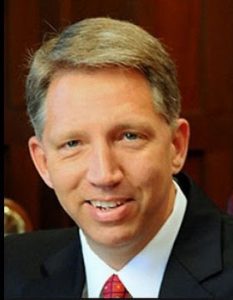 Experts say community college enrollments also tend to be countercyclical, rising and falling along with the economy. During times of economic stress, students turn to schools to gain new skills or wait out a bad job market. As more jobs open up, students return to the labor market.

Those trends held true in the most recent recession. After a surge of enrollments during the recession, starting around 2010 and 2011 community colleges began to see a drop in student enrollments across the country as the economy recovered.

“A lot of times when community college enrollments are really up is when the economy is really down,” says Dr. Scott Ralls, president of Northern Virginia Community College (NOVA).

Ralls says his system has seen four to five years of declines in enrollment, but comparatively has not seen as precipitous a drop as other schools. Students at NOVA are also taking fewer classes at a time than they did during the recession, indicating that many are working and attending college at the same time.

“In northern Virginia we have a very hot job market and that helps out enrollment in some program areas,” Ralls says.

One example of program growth is NOVA’s three-year-old cyber security program, which has 1,400 students enrolled this semester. The program started out with 50 students just three years ago. So instead of being desperate for students, the college instead is finding it difficult to keep pace with the demand for faculty for that particular course.

The success of the cyber security program is indicative of the link between local economies and community colleges, Ralls says. Approximately 17 percent of all available cyber security job openings are to be found in the Washington, D.C. area, meaning that there is great demand for credentialing and education there.

“It’s also a program where, somewhat like biotechnology or healthcare, many students entering that program have four-year degrees or master’s degrees even, so they’re coming into that program with college degrees, but looking for workplace technology-demanded skills,” Ralls explains.

In addition to an overall decline in enrollment, community colleges are also experiencing a change in student demographics in the wake of the recent recession, according to Dr. Davis Jenkins, senior research scholar at the Community College Research Center of Columbia University’s Teachers College.

According to a recent survey of IPEDs data, well over 50 percent of community college students are age 18 to 24, and fewer than 40 percent are 25 years old and above.

“In other words, 25 and above students used to be the majority,” Jenkins says. “Now they’re the minority.”

In addition to the growth of dual enrollment programs across the country, more than 100 cities and states have initiated Promise programs in recent years. Community college Promise programs are designed to help cover the cost of tuition so that students can attend school without too much financial stress, and are typically aimed at recent high school graduates.

“That increase we think is entirely attributable to Oregon Promise,” Crane says.

Community college Promise programs have a strong “signaling function,” Crane said, encouraging students who might otherwise think that college is financially out of their reach to apply.

In response to the changing demographics — as well as an ongoing emphasis on improving their completion rates — colleges now are putting their money and attention into developing guided pathways for students. Yet to successfully implement guided pathway programs, schools need money and other support from states.

“In times of financial hardship, states have to balance their budgets,” Jenkins points out. “But the cuts in many states — Florida is a current example — are really indiscriminate and not done in a way to minimize damage or produce the greatest return for taxpayers and students.”

Often, higher education is one of the first line items to be decimated in state budgets in times of financial difficulties. Changes on the horizon could spell trouble for community colleges, such as the American Health Care Act, which could potentially pass more of the cost of health insurance to states if it is passed.

“If the health care bill goes through, unless states decide to jettison health care for their people — which I don’t think is politically possible — higher education is the biggest fungible pot of money in any state budget,” Jenkins warns.

Despite the financial crunch, New Hampshire’s community colleges have become “extremely responsive” to workforce needs, Jenkins says. “The more states cut community college funding, the more they seem to try to serve their students, which is really admirable.

“I’m just concerned in many states that it’s not sustainable.”