High-ranking federal officials have spoken on historically Black college and university (HBCU) campuses for decades.  At least 20 U.S. Presidents have given commencement addresses at HBCUs. Dozens of cabinet secretaries and ranking military officers have done the same.

None, it seems, has stirred more pre-appearance drama than the commencement address expected Wednesday at Bethune-Cookman University by controversial U.S. Secretary of Education Betsy DeVos. 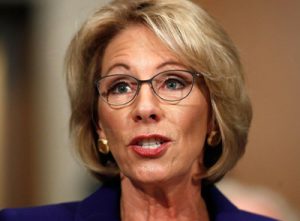 She is the first ranking federal official to address an HBCU audience at such an anxious period in American history when many HBCUs are in a fragile financial state and few education leaders know what President Trump’s position is on the role of HBCUs in the nation’s future.

DeVos, a political conservative with no past experience in higher education, has become a lightning rod for opponents of President Trump, for a variety of reasons. Being a strong backer of Trump last year in his bid for the presidency is among a list of points DeVos’ critics throw at her.

DeVos also is an advocate of `charter schools.  Her gaffe earlier this year in one of her initial statements as secretary in which she hailed HBCUs as “pioneers of school choice” reinforced fears she knew little about the institutions. HBCUs were founded when most were opened to educate Blacks legally barred from attending most institutions of higher education because of their race.

In the days leading up to her scheduled appearance, DeVos’ acceptance of the university president’s invitation to appear at the private Florida institution, has been vehemently opposed by some university alumni, faculty, students and others who admire the institution’s rich history.

The Florida State Conference of branches of the NAACP have called on the university’s president, Dr. Edison Jackson, and board chairman, Dr. Joe Petrock, to resign in advance of DeVos’ appearance.  Opponents promised to deliver petitions signed by thousands of people protesting DeVos’ appearance.

The university leaders have strongly defended the protest noting university founder Mary McLeod Bethune made sure she worked with political leaders regardless of political persuasion as long as they were working to help Black citizens get college educations.

“I understand the concerns about her (DeVos), and I genuinely appreciate those who voice their concerns in a constructive manner,” said Dr. Jackson, in a public letter published last week in the Orlando Sentinel, the major daily newspaper serving Central Florida.

“I am especially sensitive to balancing the notion of academic freedom with quelling potentially hateful and harmful rhetoric,” said Jackson.

“The political and racial chasms in our country have deepened, and college presidents have struggled with these issues over the past few months,” Jackson wrote.

“Some have rescinded invitations to potentially controversial speakers. That is not my intention with DeVos,” he said. “I am of the belief that it does not benefit our students to suppress voices that we disagree with, or to limit students to only those perspectives that are broadly sanctioned by a specific community,” he wrote, acknowledging his invitation was not popular with many.

From a distance, the Bethune-Cookman invitation to DeVos reflected a realization by the institution that the national election is over and Bethune-Cookman and its peers need to get used to dealing with the Trump team for several years to come, according to attorney Johnny Taylor, chairman and chief executive officer of the Thurgood Marshall College Fund. The Washington-based non-profit organization raises money to help pay tuitions of students who have financial need to attend HBCUs.

When the state is run by Republican political leaders, the U.S. Senate and House of Representatives are controlled by Republicans, it makes no sense to protest engaging with those elected officials, Taylor said. As for President Trump, many people still haven’t decided whether the President is Republican or Democrat, Taylor added, although all know he is a businessman who governs like a businessman.

In that context, Taylor notes, HBCU’s get upwards of 80 percent of their funds from the federal government, hastening to stress that does not mean HBCU supporters have to accept whatever political leaders come up with. It does merit hearing them out, he says.

“Everyone’s not going to agree with everyone,” Taylor says.

Of the protest over DeVos, he says, “This is a non-controversy controversy” as she has not made any negative statements about Blacks or HBCUs. “Let her speak first.”