Brown vs Board of Education removed the barrier of denying people of color their right to an education, but 63 years later the fight to ensure that students attend a “good school” continues.

“Segregation is real, segregation is limiting someone’s access by virtue of the fact that they are different and in this country what that typically means is Black, Latino or poor,” said Dr. Steve Perry, founder and head of Capital Preparatory Schools, at a panel on Tuesday hosted by the Thurgood Marshall College Fund (TMCF). 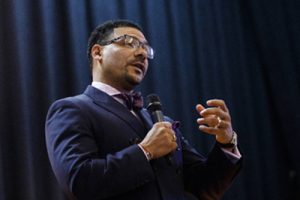 Virginia Ford, executive director of Arkansas Information Network in Little Rock, said that with school choice programs she sees diversity increasing but in areas like Arkansas “they still have so far to go … kids are just really struggling.” Students that come to her church program cannot read the bibles given to them. “They ask us to read it to them, they cannot read,” Ford said.

“The public educational system as a whole has not delivered properly,” said Alonzo Smith, history professor at Montgomery College.

“It’s a different fight to make sure that all of the schools that we allow anyone children’s to go to, are good,” said Sekou Biddle, vice president of advocacy at the United Negro College Fund (UNCF).

Biddle said that parents should challenge the “sometimes racist notion” that public schools do not prepare students for their future. Biddle placed his children in the D.C. public schools he attended as a child. “People have worked hard to make these schools good, and to keep them good, and to make them better each year,” Biddle said, adding that getting people involved in finding ways to make education deliver real results for children is where progress will begin.

Many parents send their children to schools outside their district area to ensure their children attend a ‘good school’ and receive quality education. “I think we have grown into parents who want to have some say-so in how our kids are educated,” said Ford.

Ford explained that the getting parents involved has an impact on the child’s education, because schools listen to parents. “If you don’t speak for your child who would?” Ford said, noting that her Arkansas Parent Information Center has programs that teach parents how to communicate and speak up for what they want.

Greg Forster, a Friedman Fellow at EdChoice, said research from 7 out of 10 studies shows that school choice programs are decreasing segregation in private schools, and increasing segregation in public schools due to students transferring from public to private. EdChoice is a nonprofit organization described on its website as having a goal “to empower all families with the freedom to choose an education that best fits their children’s needs.”

Forster said the increase of segregation in public schools is due to the assignment of schools based on their neighborhoods, and because “American neighborhoods are residentially segregated.”

Mashea Ashton, founder and CEO of Digital Pioneers Academy, shared that she failed kindergarten, which led to her mother placing her in private school. “I really genuinely believe that every parent should be able to choose what school and what environment,” Ashton said.

Panelists had little information on the impact of segregation or desegregation on college enrollment, persistence and completion. Moderator Robert Enlow, president and CEO of EdChoice, told Diverse the D.C. scholarship programs that serve many children of color show that “children within the programs graduate [high school] at higher rates than their peers, and they tend to enter colleges at higher rates and persistent rates.”

Perry said there needs to be more awareness of these issues. “The obvious is that there is a system in the United States of America that is designed to ensure that poor people and Black people in particular or people of color in general do not gain access to the quality of life that Chief Justice Warren talked about.” Perry said that until we address the controversy of the school system, no changes will be made.

Promoting Inclusion on a National and International Scale

Latest March on Washington Focuses on Not Going Backward