A couple years ago, someone from California wrote me to tell me that: “Mexicans are taking over Chicano Studies.”

Apparently, the person did not know I was born in Mexico. And they knew less about what this topic triggers within me. During the late 1960s and early 1970s, I did become part of the Chicano Movement, and thus identified as such during that time, though throughout most of my life, my constant identity has been Mexicano. At times: Me-Xicano. 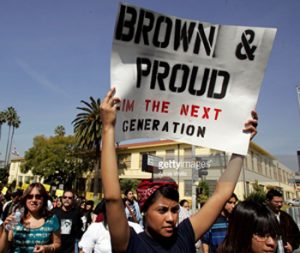 Because of my parents’ guidance and influence (stories), and because of my relatives from Southern Mexico, I have pretty much always identified as part of the original peoples of this continent, including as hombre de maiz (man of maiz), or macehual, a Maya-Nahua term, for a simple human being. Both of these are identities rooted to the land, though they have nothing to do with nation-states, nor do they acknowledge borders. Many peoples from maiz-based cultures identify as such and ask no one for permission to do so. In this country also, neither of these will be found on Census or any other bureaucratic forms, and they generally are also outside of the mainstream media.

I feel comfortable with my own identity, yet, when I received that above message, it resuscitated negative memories that I had from the early 1960s. That was the pre-Chicano movement era, an era in which I was reminded by Mexican Americans almost on a daily basis that I was Mexican as opposed to Mexican American. This was prior to the ascendancy of the terms Chicano/Chicana and Raza or La Raza or gente (people), in the latter part of that decade. But even then, that same attitude persisted while Mexican-Americans were exploring or adopting these new identities.

One of the identities they previously identified with was Spanish. This was not New Mexico, whose residents were notorious for denying their Mexican ancestry, but Los Angeles. Elsewhere, Latin or Spanish American was popular and “respectable.” As Chicano historian Rudy Acuña has noted, “Anything But Mexican.”

While we are not in the same political climate today, we do seem to be part of an era in which the identity of these same peoples continues to change. However, there is a difference between how one sees oneself, versus the “official” terms one identifies with in public.

For me, one’s identity rises to the level of sacred and thus, when the government, media and other institutions impose identities upon individuals, communities or peoples, it can be very violating. This is generally true in regards to peoples of any culture, but especially true for peoples of Mexican descent, that have a long and sordid history of having false identities thrust upon them here. This is referred to as epistemic violence.

After the height of the Chicano movement, umbrella terms such as the government-sponsored Hispanic or Latino/Latina, came to supplant specific terms such as Mexican, Guatemalan Puerto Rican or Peruvian, etc. These umbrella terms generally have always emphasized a European or colonial identity, as opposed to the Indigenous or African roots of the people.

But to be sure, false identities did not begin in this country in the past generation, but instead are rooted in 300-year colonial practices imposed by Spain upon the Americas, especially in Mexico. If one does not understand why this is a problem, it is akin to asking the slave to identify with the slavemaster.

Suffice to say that identities that connote “property of Spain” or Europe, don’t quite cut it in the 21st century — or even the 16th-20th centuries. While perhaps it is confusing to others, indeed, there are some constants here. Most identities are imposed and historically, most U.S. institutions always have suppressed and denigrated the Mexican identity. Incidentally, the word Mexico is of authentically Indigenous origins; it is probably the reason it is generally suppressed here.

That said, like most Mexicans, I will always be Mexicano — or Mexicana, for women — and will continue to identify as gente the maiz and macehual.

When that person warned me about Mexicans taking over Chicano Studies, I asked him if he was familiar with Luis Leal, the “founder” of Chicano literature; poet Alurista, author of El Plan Espiritual de Aztlan; Chihuahua-born poet Abelardo “Stupid America” Delgado; journalist Ruben Salazar (killed on Aug. 29, 1970, in East L.A.); Chicano Moratorium co-founder Ramses Noriega; and torture survivor, Olga Talamante. All were born in Mexico and all central figures in the Chicano Movement.

I didn’t even mention Carlos Santana.