Higher Education News and Jobs
Category: News,News from this Week,Subfeature | 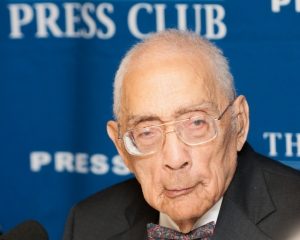 Long before he retired from his daily work, Simeon Booker had earned widespread recognition as a living legend, even from people who only knew him by name or the work he had done.

History will note that the range and depth of his work and the countless hours, days, months and years he put into it were matched by few, if any. It was no surprise when colleagues and people who knew him by reputation did not hesitate to note his standing in American history. The title “The Dean of Black Journalists” was one of many accolades bestowed upon him during his career. More followed as news was reported this past weekend of Booker’s death at age 99.

“He was an amazing journalist who really deserved the title,” said his colleague Dorothy Gilliam. She worked with Booker as a reporter for Jet Magazine from 1957 to 1959 and later was welcomed by Booker and his wife to the nation’s capital when she was hired at The Washington Post as its first Black female reporter.

Gilliam’s term, “amazing” was among the similar descriptions peers and strangers used to characterize Booker, a journalist who reported for Jet for 50 years. During his tenure and from that post, Booker covered 10 U.S. presidents, scores of members of Congress and nearly every higher education executive in Washington. He wrote about historically Black colleges and universities (HBCUs) long before they were merely back-page mentions in local daily papers.

Booker was among those journalists who, in the 1950s, were considered pioneers in boosting the significance of civil rights coverage by mainstream media in America. His writings, highlighted by his weekly Ticker Tape columns in Jet, helped make the publication’s main ingredients on the reading menus of millions of people across America and around the globe, regardless of their backgrounds or literacy level.

Booker, who joined Johnson Publishing Company, the publisher of Jet and Ebony, was noted most for his historic reporting on the 1955 lynching murder in Mississippi of 14-year-old Emmett Till, an Illinois teenager who was visiting relatives in Mississippi.

Till had been beaten then hanged by a group of White men set on punishing him for reportedly whistling at a White woman at a small-town neighborhood grocery. Booker’s reporting with vivid, shocking pictures taken by Jet photographer David Jackson, shocked the nation and is cited for helping spur new attention to civil rights abuses and demands in the late 1950’s.

Booker’s coverage for Jet pushed other mainstream media outlets to improve their coverage of racial issues across the nation, with a focus on the South. His reporting earned him a seat at the table of influential journalists in Washington. John H. Johnson, the publisher of the monthly Ebony and Jet, the magazine’s small sister weekly publication, moved Booker to Washington as Jet’s Bureau Chief. Booker kept that position until he retired in 2007.

“Mr. Booker was relentless, focused and had a sharp sense of humor,” said Bryan Monroe, who was Vice President and Editorial Director of Ebony & Jet magazines from 2006-2009.  Monroe, nearly half Booker’s age, grew up reading Jet.

“Even in his later years, he would show up to support young journalists trying to follow in his footsteps” said Monroe, Booker’s last editor who now works as a journalism professor at Philadelphia’s Temple University.

While he was highly noted for his Emmett Till reporting and writing, Booker was widely regarded among journalists as a pioneer on race reporting.  In addition to his reporting on Till’s lynching, he was believed to be the first journalist to ride in 1961 with the Freedom Riders, non-violent citizens seeking to end racial segregation in interstate bus transportation.