Guillermo: U. of California Achieves Diversity Despite Prop. 209 - Higher Education

Guillermo: U. of California Achieves Diversity Despite Prop. 209

When the University of California released early numbers of its newly admitted freshman class, the school chose to boast that more Californians were being admitted to the UC system.

The PR release headline read: “Admissions offers up, on track to enroll 10,000 more California students by next year.” 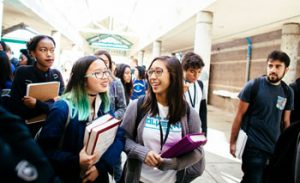 That’s why reporters take PR releases with a grain of salt.

Buried in the university’s own numbers was the real story.

Diversity on UC campuses is booming, and the headline to my story earlier in the week said it:  “Students of Color Near 74 percent of U. of California’s Fall Freshman Class.”

The significance of the numbers is greater than you think.

In 1996, Californians passed a law written and supported by right-wing zealots trying to stop diversity and affirmative action efforts throughout the state. Deceptively titled, “The California Civil Rights Initiative,” Prop. 209, was driven by the notion that color-blindness was a virtue. The first sentence of the initiative reads: The state shall not discriminate against, or grant preferential treatment to, any individual or group on the basis of race, sex, color, ethnicity, or national origin in the operation of public employment, public education, or public contracting.

Since then, the state’s public institutions of higher ed have had to figure out how to create equity without the use of race, sex, color, ethnicity, or national origin.

The anti-affirmative action crowd thought they had the winning formula to stymie diversity.

But more than 20 years later, and the UC numbers show that even with both hands tied behind their backs, blindfolded, and shackled by Prop.209, the university admissions folk have managed to achieve diversity goals that may have seemed unimaginable.

Diversity in America can’t be stopped. This is the country we have.  Without being able to use race or ethnicity, UC managed to closely mirror the state’s population.

The real irony of the numbers is that the underrepresentation is now among Whites.

Or as a professor texted me, maybe we’ll find other groups, specifically the over-represented Asian Americans creating alliances with Whites to stop diversity.

In recent years, there have been attempts to overturn Prop. 209.

Surprisingly, the groups fighting the end of 209 have been Asian Americans, a group that has done well after 209.

The anti-affirmative action Asians look at those numbers and wonder why they all can’t be even higher, like in the 40 percent range. Especially at the prestige schools like Berkeley and UCLA.

They see Latinos and African Americans taking up places that would go to Asians on merit.

The truth is we’re already seeing the battle lines drawing for the next generation fight for diversity.

We’re seeing it in the Harvard suit were Whites recruited Asians to challenge admissions as “victims.”  And we’re seeing it developing in California.

In the meantime, we should look at the big picture and dwell on the positive news from those UC preliminary numbers. They’re enough to keep an activist optimistic.

Even after 20 years of Prop. 209, the lesson is clear: You just can’t stop diversity.

Emil Guillermo is an award-winning journalist and commentator. He writes for the civil rights group AALDEF at http://www.aaldef.org/blog

Some Push for Degree Reinstatement for Texas CPS Caseworkers

American Indians use Education, Experience to be More Active in State Politics