Dr. Maryam Mirzakhani, a Stanford mathematics professor since 2008, and the first and only woman to win the prestigious Fields Medal in mathematics, died July 14 after a long fight with cancer, according to a Stanford press release. She was 40 years old.

Mirzakhani won the quadrennial Fields Medal in 2014, which the release noted is often equated in stature with the Nobel Prize. Her specialty was theoretical mathematics, described as akin to a foreign language to non-mathematicians. But it enabled Mirzakhani to explore the world of moduli spaces, Teichmüller theory, hyperbolic geometry, Ergodic theory and symplectic geometry. 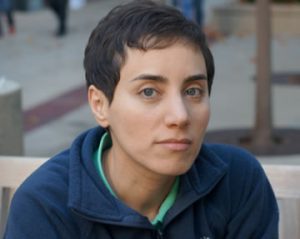 What resulted was Mirzakhani’s detailed research into curved surfaces such as spheres, doughnut shapes and amoebas.

“Her work was highly theoretical in nature, but it could have impacts concerning the theoretical physics of how the universe came to exist and, because it could inform quantum field theory, secondary applications to engineering and material science,” according to the university news release. “Within mathematics, it has implications for the study of prime numbers and cryptography.”

“Maryam is gone far too soon, but her impact will live on for the thousands of women she inspired to pursue math and science,” Stanford President Marc Tessier-Lavigne told Stanford news services. “Maryam was a brilliant mathematical theorist, and also a humble person who accepted honors only with the hope that it might encourage others to follow her path. Her contributions as both a scholar and a role model are significant and enduring, and she will be dearly missed here at Stanford and around the world.”

Mirzakhani said she enjoyed pure mathematics because of the elegance and longevity of the questions she studied, according to the release. Colleagues describe her as ambitious, and fearless in tackling problems others would not. Her preferred method of working a problem was to doodle on large white sheet of paper that her daughter would describe as “painting.”

“You have to spend some energy and effort to see the beauty of math,” Stanford quoted Mirzakhani in a news release. She also said “I don’t have any particular recipe [for developing new proofs]. … It is like being lost in a jungle and trying to use all the knowledge that you can gather to come up with some new tricks, and with some luck you might find a way out.”

Born in Tehran, Iran, Mirzakhani attended an all-girls school and first gained international recognition competing for Iran in the International Mathematical Olympiad team, winning a gold medal in 1994, and two gold medals in 1995.

She attended Sharif University in Tehran, then went to graduate school at Harvard, studying under Curtis McMullen, a fellow Fields Medal winner.

After her doctorate at Harvard, Mirzakhani taught at Princeton University, and was a research fellow at the Clay Mathematics Institute before joining the faculty at Stanford.

“Maryam was a wonderful colleague,” said Ralph L. Cohen, the Barbara Kimball Browning Professor of Mathematics at Stanford told the university news service. “She not only was a brilliant and fearless researcher, but she was also a great teacher and terrific Ph.D. adviser.  Maryam embodied what being a mathematician or scientist is all about:  the attempt to solve a problem that hadn’t been solved before, or to understand something that hadn’t been understood before.  This is driven by a deep intellectual curiosity, and there is great joy and satisfaction with every bit of success. Maryam had one of the great intellects of our time, and she was a wonderful person.  She will be tremendously missed.”

Mirzakhani is survived by her husband, Jan Vondrák, and a daughter, Anahita. A university memorial is planned for the fall.