When Oscar Ntakontagize won the green card lottery, he took a chance and moved to the United States on his own from Rwanda.  “There’s more job opportunity here,” Ntakontagize said. “And also access to education.”

He arrived in the U.S. in 2014, settling in Dayton, Ohio. The southwestern Ohio city was an affordable place to start a life, in Ntakontagize’s eyes. 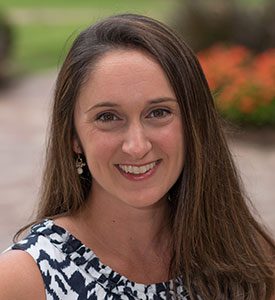 Julia Thompson is associate director of admission and financial aid at the University of Dayton.

Some might know Dayton from the HBO documentary “The Last Truck,” which depicts GM’s decision to close its final Dayton-area manufacturing plant in 2008. GM was formerly one of the largest employers in the area.

Last fall, Ntakontagize enrolled in the local Sinclair Community College, a two-year institution serving approximately 30,000 students in the Dayton area. He had considered four-year schools, but Sinclair was the most cost-effective option out there.

Fortuitously for Ntakontagize, Sinclair initiated a closer transfer partnership with the University of Dayton (UD), a private, four-year Catholic institution in the area, the same year he enrolled. Students had transferred from Sinclair to UD in the past, but school officials wanted to make that transition more seamless.

This past fall, the two schools welcomed the first cohort of six students to the UD Sinclair Academy, a new joint venture intended to bridge the distance between the two schools. One of the most significant barriers to students transferring to a four-year school from a two-year school is course transferability, according to Julia Thompson, associate director of admission and financial aid at UD.

“Course transferability is a huge hurdle for students and the schools that they’re looking at,” Thompson said. “And really understanding from the very beginning are they making the right choices about taking classes that they know down the road will be transferable and will get them that degree in a timely manner.”

The academy offers clearly articulated pathways from Sinclair to UD in about 24 majors. Students will complete the first two years of college at Sinclair, working with academic advisors to keep them on the right path from the outset. After earning an associate’s degree and provided that they maintain a 3.0 GPA, students will transfer as juniors to UD.

Currently, fewer than a third of Sinclair students transfer to a four-year school, according to Kimberly Collins, director of university partnerships at Sinclair. Many transfer on to Wright State, which is right in the area and allows students to live at home.

UD has increasingly been on Sinclair students’ radars. “We definitely have more and more students expressing interest in UD,” Collins said. Until the advent of the academy, however, cost had always been a prohibiting factor. Tuition and room and board at UD is just under $55,000.

Of the six students who enrolled in the academy last fall, four made it through to the summer. An additional 22 students have signed on for next fall so far.

Making the overall degree more affordable, students will pay community college rates in their first two years at Sinclair. UD, in turn, will freeze tuition at the effective rate it was when students first enrolled in the academy. That way, they know from the start how much they can expect to pay for their junior and senior year.

“We lock them in at that tuition up front, so that there’s no surprises when they’re fully ready to transfer to UD and start taking classes,” Thompson said.

The program goes beyond the standard transfer program because students can participate in UD student life if they so choose, joining student clubs, attending athletic events, meeting with university academic advisors and engaging with peer mentoring on campus.

“It’s helpful,” Ntakontagize said. “I’m working with [an] academic advisor at UD. He helped me know which classes I have to take, so there is a clear pathway.”

Ntakontagize plans to pursue a degree in chemical engineering. He has been separated from his family for years, but said that there is a possibility his wife may be able to get a visa to join him in Dayton next year.

In addition to the impact on the lives of individual students, school officials say that they believe the program could have broader implications for the local community. Students who attend Sinclair are likely to stay in the area once they graduate, so they hope that graduates of the academy will also remain in Dayton once they finish their degrees.

“I think both of our schools are seeing how important it is for students to be able to go on for a bachelor’s degree,” Collins said.

R.I.P.: The Tired Myth of the Apathetic Black Student