At the event hosted by Educational Testing Service (ETS) Center for Advocacy and Philanthropy and Strada Education Network, in partnership with the American Indian Higher Education Consortium (AIHEC) and the American Indian College Fund, several presidents also spoke on the importance of putting the “tribal” back into tribal colleges. They proposed accomplishing that by highlighting the historic and cultural importance of the identity and purpose of the institutions for indigenous students. 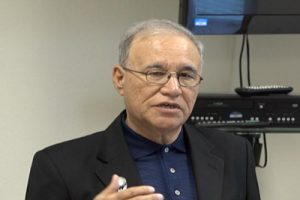 “Your institutions are unique in your approach,” said Walt MacDonald, president and CEO of ETS, in his welcoming speech to the tribal college leaders. “They are often the only post-secondary institution for students in rural” and indigenous areas, he added.

Timothy Renick, vice provost and vice president of enrollment management and student success at Georgia State University, opened the convening in a keynote speech that emphasized the importance of data collection and assessment to increase student outcomes and retention rates for institutions like TCUs.

“I don’t believe higher ed is a business,” Renick said. “However, you have to invest, especially in troubled times. You can’t sit on your morals and think ‘Let’s recede and do less and that’s how we’ll get through.’”

Data showed that students who could not read had little chances of success, Shortbull said. These students were also at risk of dropping out.

Renick, the GSU administrator, discussed four challenges affecting his own institution — summer melt, underprepared and at-risk incoming students, conflict with choosing a major, and staying on track — and addressed practical and low-cost steps TCU campuses could take to improve outcomes for students.

Audience feedback showed that TCUs faced several of the same problems at Georgia State in addition to the specific challenges faced on reservations such as alcoholism, behavioral health problems, people having little to no access to transportation, older demographics of students with families, and a mismatch in degree programs compared to jobs available in the area students lived in.

One of the steps GSU took to combat these problems included using and tracking student engagement on a $15,000 chatbot with over 200,000 common knowledge answers for students to text personal questions about completing the FAFSA, submitting important documents, or registering for the correct classes.

GSU also created a “program picker” portal for first-year students to match their interests with the majors at the college and with jobs in the community, allowing the school to decrease the amount of time — and the amount of money — students spent completing their degree.

According to the presenter, many problems of student enrollment or retention stem from older bureaucratic policies and and resistance from faculty for necessary change needed to better support their students.

While it may be hard to get faculty to do things a certain way, reliable data can be used to persuade faculty to really put the best interests of students first, Renick said in his GSU data presentation.

Charles Roessel, president of Dinè College, and Justin Guillory, president of Northwest Indian College, said TCUs can reduce pushback by asking faculty and other administrators to consider their founders’ original mission for their institutions.

“Are we a college unto ourselves? Or are we for the Navajo people?” Roessel asked in his own presentation. “Let’s look at data of students before they come to us, and let’s align ourselves to meet them.”

Administrators can also improve enrollment by examining targeted communities at their schools to address the needs for specific subgroups. Sandra Boham, president of Salish Kootenai College, noted that her institution initially failed at evaluating their transfer student population.

“Don’t just collect data to see what is wrong and not do anything with it,” Boham advised. After examining the demographic data of transfer students to examine what barriers they faced before dropping out or not returning the next quarter, the college now offers credit recovery at no tuition cost for students who were placed on academic suspension previously.

Shortbull emphasized that gathering institutional data is essential to the TCUs and their students’ success, adding that tribal colleges and their boards must find the funding to pay for this investment. TCU leaders can access the U.S. Census data to evaluate the potential pool of students entering their institutions, and they can also read the National Indian Education Study conducted by ETS for the federal government.

Such data, and “buy-in” from all departments at the institution, give the schools a starting point to establish “clear, strong goal statements about student success,” said Deborah His Horse is Thunder, the NARCH research director for AIHEC. However, presidents Shortbull and Boham asserted that the institutions “can’t be everything to everybody.”

Guillory, Northwest Indian College’s leader, said that keeping student outcomes associated with identity helps keep the institution accountable to the founders’ mission. Several TCU presidents said that their schools require their students to learn the native language of their people.

Courses such as “Introduction to Cultural Sovereignty” and “Reclaiming Our History” at Northwest Indian College bridge the western and traditional education for Guillory’s students, and also empowers them, he said.

At Dinè, President Roessel says he emphasizes making “connections of relevance” between Native American and traditional western education models so that his institution will not be a “foreign place for students.” Students may ask why they should get a degree from a TCU, he says, but “those with a sense of who they are, are more successful,” he told Diverse.

Deborah Parrish, president of Keweenaw Bay Ojibwa Community College, said her institution takes pride in offering cultural and civic engagement opportunities for students. Programs like the Eco-Ambassadors, which allows students to study and monitor water streams, and the “Voices of Wisdom and Memory” oral history project, keep elders’ stories and the overall community’s importance within the education model.

For TCUs, the convening marked the beginning of the conversation to address the ways that leaders and administrators can serve its purpose for students in an education system that oftentimes overlooks the needs of minority serving institutions.

Dr. Lorenzo L. Esters, vice president of philanthropy at Strada, said the organization believes that students, such as those attending TCUs, should have the necessary financial support for degree and career attainment through what he says is “completion with a purpose.”

Despite evidence of declining student enrollment and the negative issues associated with reservations, TCUs remain “a beacon of hope for our people on our reservations,” said Shortbull, the head of Oglala Lakota College. “It has to give hope for those that are in the most need of hope in this country.”