Dr. Melvin C. Terrell, emeritus vice-president of student affairs at Northeastern Illinois University, has been selected a recipient of the 2019 Equity, Diversity and Inclusion Award for region III of the Student Affairs Administrators in Higher Education (NASPA). 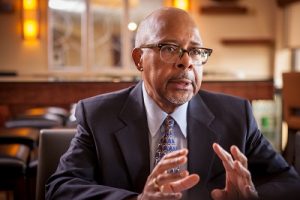 The award honors a senior student affairs professional or faculty member who has demonstrated a deep commitment to advancing diversity and inclusion throughout their administrative or academic tenure.

This year’s regional winners, announced at the recent NASPA Regions II & III Joint Summer Conference and Symposium in Washington, D.C., will advance for consideration at the national level.

He has authored numerous articles and publications and received many accolades, including the 2004 NASPA Outstanding Contribution to Literature or Research Award and the 1990 Scott Goodnight Award for Outstanding Performance as a Student Personnel Administrator. He also was also a leader in the NASPA Minority Undergraduate Mentoring Program.

But he may best be remembered as a mentor, evidenced by Advancing Equity and Diversity in Student Affairs: A Festschrift in Honor of Melvin C. Terrell, an anthology of views and personal experiences of more than 20 leading scholars and educators across the U.S. about their respect and appreciation for Terrell’s work. The book was featured in a Diverse profile of Terrell last year.

Best Practices and Solutions are Shared at UNCF Convening

The Risk of Displeasure: How to Write Without Permission

Students Feel Anxious About COVID-19. Why Aren’t They Turning to Campus Mental Health Resources For Help?