Wichita State University president Jay Golden’s job may be in jeopardy because he canceled Ivanka Trump as commencement speaker at an affiliate college, angering some donors, said a report in the Wichita Eagle cited by the Wichita Business Journal.

After news about this broke on Wednesday, students and faculty took to social media to support Golden, and some created a #IStandWithGolden hashtag. Additionally, close to 5,000 people signed a petition saying Golden should remain Wichita State president. 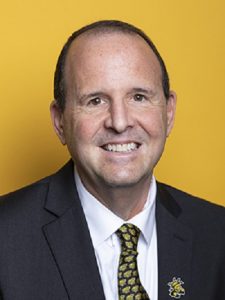 The Kansas Board of Regents, which governs Wichita State, was scheduled to hold a special meeting Wednesday afternoon to discuss Golden’s future. The meeting had begun by press time, but it hadn’t concluded.

Last Thursday, WSU Tech, a Wichita State affiliate, said in a joint announcement with the university that the president’s daughter was to be the commencement speaker on June 6. Later in the day, after criticism from students and faculty, the college announced that the “plans have been refocused more centrally on students” so a nursing graduate would instead take her place. Students and faculty were upset with President Donald Trump’s handling of the George Floyd protests. Ivanka Trump said on Twitter that “viewpoint discrimination” and “cancel culture” are the reasons she was dropped as speaker by WSU Tech.

The Eagle report said university donors, particularly Koch Industries and Pizza Hut, have threatened to pull support because of Golden’s decision, one he earlier said he “owned.” Koch Industries has given Wichita State millions over more than 20 years and its CEO Charles Koch is a longtime supporter of the Republican Party.

In another report on Wednesday, Koch Industries said it won’t pull its support to the university but it does object to disinviting speakers. However, a letter to the board, shared with the Eagle, suggests the two companies are “very upset and quite vocal in their decisions to disavow any further support” to Wichita State.

Supporters of Golden’s decision to cancel Ivanka Trump as speaker said the university president was right in listening to the students and they are proud of him.

“Dr. Golden was acting on the behalf of his university after having received an open letter (with 488 signatures from WSU staff, alums, and students alike) protesting [Ivanka] Trump’s virtual presence at any WSU-affiliated event,” said the petition that urged Golden remains university president.

Many were angry that Golden’s decision is being questioned.

“I’m outraged at the fact that @PresidentWSU could lose his job FOR DOING HIS JOB?! He has always supported what the students want above all else and WE didn’t want Ivanka. If KBOR goes through with this it will be a slap in the face to the students of WSU. #Istandbygolden,” said one tweet.

Other said donors must not have a say in a university decision that responds to students’ views.

“Regardless about how you feel about Trump or Koch, universities exist to serve students … not donors,” Douglas Design District executive director Renee Duxler wrote Wednesday on Facebook. “And while donors do have the right to pull money, it’s disturbing (yet not surprising) that so many would choose to protect their own status quo versus supporting the students and faculty who were clearly and explicitly condemning racism and police brutality in their protest.”

Time for Anti-Racism: A Way Forward for America and Higher Education