An investigation by an outside law firm released on Thursday has determined that systemic racism exists within the University of Iowa football program,  reports the Charlotte Observer.

According to the investigation, the program, led by head coach Kirk Ferentz (who is the longest-tenured head coach in college football), 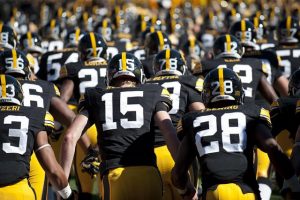 suffered a culture that “perpetuated racial bias against Black players and allowed some current and former staff members to demean and bully others.”

“This review brings us face-to-face with allegations of uneven treatment, where our culture that mandated uniformity caused many Black players to feel they were unable to show up as their authentic selves,” Ferentz said in a statement. “I want to apologize for the pain and frustration they felt at a time when I was trusted to help each of them become a better player, and a better person.”

Though many players cited the former football strength and conditioning coach Chris Doyle as the main source of their mistreatment, the investigation, which included interviews with 111 current and former players and employees, found that racism went beyond Doyle, who was let go with a $1.1 million severance agreement last month. The law firm provided additional reports on current and former staff who were also accused of demeaning and bullying players.

In response, Dr. Bruce Harreld, the University of Iowa’s president,  said the university will address those allegations, which remain confidential, adding, “It is clear that the climate and culture must and will change within our football program.”

Harrison B. Wilson Getting Honorary Doctorate from University of Kentucky