When Re-Opened Campuses Close, Students Need to Figure Out Where to Go - Higher Education

Breanna Holbert, president of Chico State University’s Associated Students, knew her campus was going to close again this fall, though the decision came earlier than she predicted. Just a week into the semester, the university announced that it would shut down its dorms, and most students would need to move out within a week.

She was “100% expecting it” as coronavirus cases cropped up in the residence halls, she said. “I just knew.”

Some students went home to their families. Others moved off-campus with help from university housing, posting cheery pictures of their first apartments on Instagram. Students without other options were given the opportunity to stay, and 150 chose to remain on campus. 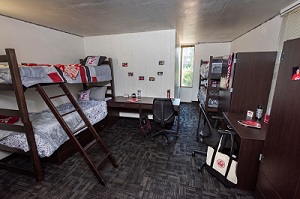 Holbert expects the closures to be hard on the school’s low-income students.

But when campuses double-back on re-opening, not all students have alternate housing waiting for them, said Edward Conroy, associate director of research communication at Temple University’s Hope Center for College, Community, and Justice.

“We know there’s a significant portion of students who don’t have somewhere else to go, who if they’re not living on campus are couch surfing or living in their car or are in very precarious situations,” Conroy said. “There are obviously real challenges, particularly if they came back to campus and now all of the sudden [have] to move off again.”

For James Madison University second-year Ryan Ritter, the re-opening and closing feels like a “cat and mouse game” with students. He’s the chair of his student government association’s COVID-19 response committee.

Ritter was skeptical of the school’s re-opening plan in the first place and he’s relieved that it closed. Residence halls were operating at full capacity, albeit with a ban on outside visitors, he said, which made many resident assistants “genuinely afraid” to work in the dorms. The university hosted a first-year orientation event, an outdoor movie night of up to 250 people, he said. When COVID-19 cases climbed, he wasn’t surprised.

While his university closed its dorms, it also promised to update students on Sept. 25 about whether students could return to campus. He thinks it would be “extremely dangerous” for students to be brought back a second time – and a bad look for the university. But also “moving is a pretty significant effort,” he said. “And it takes money. Some people don’t have the resources to do that all the time. We just need to be consistent in our planning.”

From Conroy’s perspective, there are better and worse ways to close campus dorms, though he acknowledges the pandemic is an unprecedented situation for higher education and there are no “proven solutions” to its panoply of problems yet.

For one thing, even if schools shut down in-person learning, campuses can keep dorms and food pantries open to the students who most need them, he said. And it’s crucial that universities communicate those options to students – and a speedy route to sign up for them – rather than have students seeking out that information themselves.

“The more the colleges can limit administrative burden for students here, the better it will be for those students to feel supported,” he said. If nothing else, schools can “communicate care” to their students by being transparent about what supports they have the bandwidth to offer.

Holbert also stressed the value of clear communication. While Chico State University leaders came into the fall semester with a “plan A, plan B, plan C” for how to vacate students, Holbert doesn’t think that level of planning was transparent to students.

When the campus had to close, the university was prepared, but from students’ point of view, the university suddenly decided they had to move out in a week. They felt like, “What the heck? Why such a late notice?” she said.

In general, she would have liked to have seen more transparency with students about COVID-19 plans and protocols over the summer. The university planned the re-opening for months – and was open with students about what they could expect a week before classes – but she felt like it was too “late in the game.” Students had already started planning meet ups with their sororities, fraternities, athletic teams and clubs. If they’d been clued in earlier, and more firmly, maybe they would have been more careful and the dorms could have stayed open for longer.

“I think we could have, on the front end, done a lot more of building that camaraderie, building that sense of community for students, setting those expectations for how to protect one another and why it’s important,” she said.

Race and Higher Education in Virginia